In two separate studies, in 2014 and 2017, young adults in their twenties were asked to play 3D video games of logic and puzzles on platforms like Super Mario 64. Findings showed that the gray matter in their hippocampus increased after training. The hippocampus is the region of the brain primarily associated with spatial and episodic memory, a key factor in long-term cognitive health. The gray matter it contains acts as a marker for neurological disorders that can occur over time, including mild cognitive impairment and Alzheimer's. West and his colleagues wanted to see if the results could be replicated among healthy seniors.

Experiments with seniors at home

The research team recruited 33 people, ages 55 to 75, who were randomly assigned to three separate groups. Participants were instructed to play Super Mario 64 for 30 minutes a day, five days a week, take piano lessons (for the first time in their life) with the same frequency and in the same sequence, or not perform any particular task. The experiment lasted six months and was conducted in the participants’ homes, where the consoles and pianos, provided by West's team, were installed.

The researchers evaluated the effects of the experiment at the beginning and at the end of the exercise, six months later, using two different measurements: cognitive performance tests and magnetic resonance imaging (MRI) to measure variations in the volume of gray matter. This enabled them to observe brain activity and any changes in three areas: 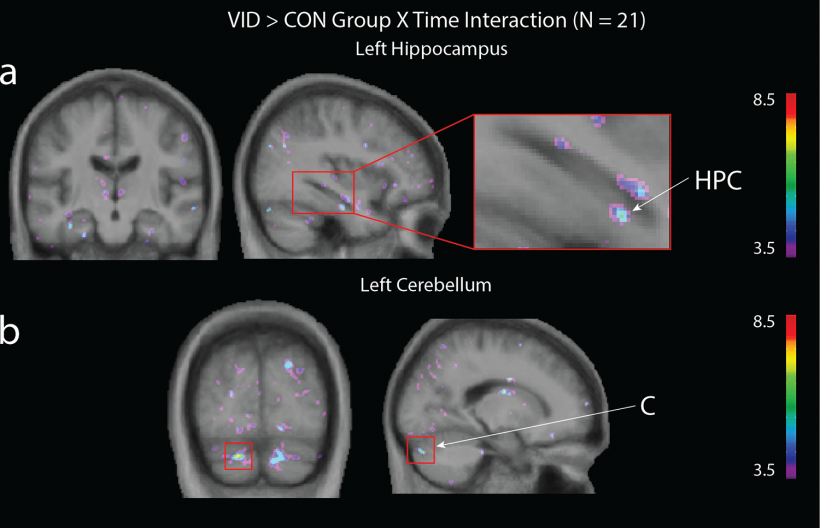 According to the MRI test results, only the participants in the video-game cohort saw increases in gray matter volume in the hippocampus and cerebellum. Their short-term memory also improved. The tests also revealed gray matter increases in the dorsolateral prefrontal cortex and cerebellum of the participants who took piano lessons, whereas some degree of atrophy was noted in all three areas of the brain among those in the passive control group. What mechanism triggers increases in gray matter, especially in the hippocampus, after playing video games? “3-D video games engage the hippocampus into creating a cognitive map, or a mental representation, of the virtual environment that the brain is exploring.," said West. "Several studies suggest stimulation of the hippocampus increases both functional activity and gray matter within this region."

Conversely, when the brain is not learning new things, gray matter atrophies as people age. “The good news is that we can reverse those effects and increase volume by learning something new, and games like Super Mario 64, which activate the hippocampus, seem to hold some potential in that respect,” said West. Added Belleville: “These findings can also be used to drive future research on Alzheimer's, since there is a link between the volume of the hippocampus and the risk of developing the disease.” “It remains to be seen," concluded West, "whether it is specifically brain activity associated with spatial memory that affects plasticity, or whether it’s simply a matter of learning something new.”

The German Center for Neurodegenerative Diseases (DZNE) is just starting the operation of a new high-performance computer in Bonn. It should significantly accelerate the evaluation of biomedical data…

Promising sensor to screen for Alzheimer's

Canadian researchers are developing a new, ultra-sensitive biosensor to screen for Alzheimer’s disease and other diseases. The device has successfully completed the proof-of-concept stage.

Identification of elderly persons at risk of developing cognitive impairment and dementia could be made possible by examining ergothioneine levels in the blood, researchers from Singapore find.