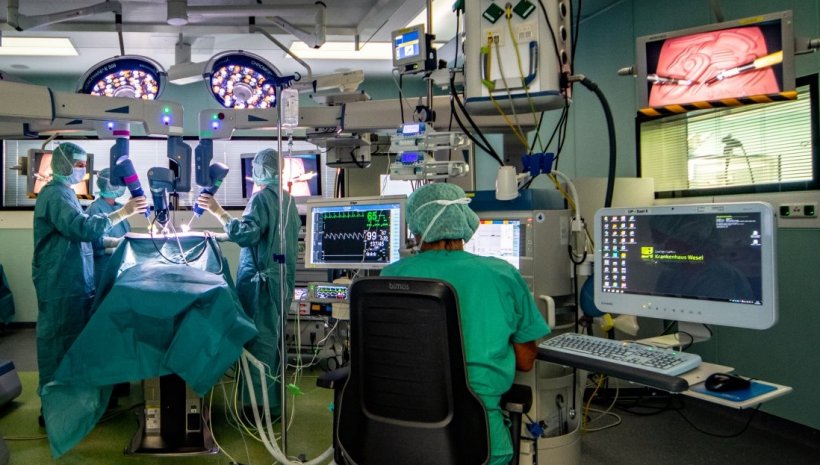 ‘We wanted to be the first in the Lower Rhine region to go to market with a robotic system as we believe that this type of digital surgical assistance represents the future,’ explains Rainer Rabsahl, CEO of the 356-bed hospital. ‘We have been a very innovative healthcare institution ever since our foundation,’ says Rabsahl. The EVK Wesel was one of the first hospitals in the Lower Rhine region to set up an Oncology Department, a Stroke Centre and a Nephrology Department. The EVK Wesel is also amongst the pioneers in hip and knee endoprosthetics. ‘For a hospital of our size and especially in a rural region, this is not a matter of course. Luckily, we have always had a good feel for which innovations are likely to become established,’ explains the CEO.

The Senhance Surgical Robotic System for minimally invasive procedures in general and visceral surgery was introduced in Wesel at the beginning of August. It provides the surgeon, who sits next to the patient in a comfortable position at an open console during the operation, with pin sharp, high resolution images enlarged up to six times. The camera is controlled with the surgeon’s eye movements, the instruments inside the patient’s abdomen are controlled via the hands. An integrated tremor filter eliminates the slight jitters experienced by everyone. This facilitates working with a level of precision not otherwise possible with human hands.

It is this precision which has already attracted a lot of attention and is very sought after. ‘We have patients who come to us and explicitly state that they want this device to be used for their surgery,’ reports Rabsahl. ‘We have not seen any fear of, or scepticism towards robotically assisted surgery.’ 40 operations were carried out between August and October, with a target of 240 per year. Says Rabsahl: ‘However, I must emphasise that we will not operate on patients who do not require surgery. We do not carry out more operations just because we have a new system. The patient obviously always comes first.’

The advantages for the patient are obvious though: Surgery is less invasive due to smaller incisions and therefore smaller scars, with less wound pain. The system in Wesel is used for hernia operations, gall bladder removal and oncological, abdominal interventions. Cancer patients benefit particularly from the new technology. It is planned to extend the use of the system to gynaecological interventions as well. ‘We are taking this step by step, as stipulated in the training plan for surgeons,’ explains Rabsahl. ‘Training with the new robot takes a certain amount of time, and at the moment each intervention is supervised by an external doctor experienced in using the robotic system. We can also draw on constant support from a Transenterix technician. Safety is our main priority.”

Rabsahl reports that his staff are proud to work in a hospital which can afford such modern equipment. ‘This investment was certainly a financial challenge for our hospital, but we look at this as a means of safeguarding the future.’ The hospital specifically aims to attract the attention of young doctors in this way and hopes that the robotics system will provide a competitive advantage which will also have an impact on economic viability in the long run.

The EVK Wesel is not only a reference centre but also an observation and practice centre: interested surgeons and students can gain an insight into surgical procedures of the new generation – and may become motivated to return as employees at a later stage.

Rainer Rabsahl is CEO of EVK Wesel GmbH since 2004. The qualified business economist is also responsible for several health centres and care facilities that are predominantly located on the large campus area.

Professor Dr Henning Windhagen is a great fan of semi-automatic systems that help with implants but leave the surgeon in the driver’s seat.