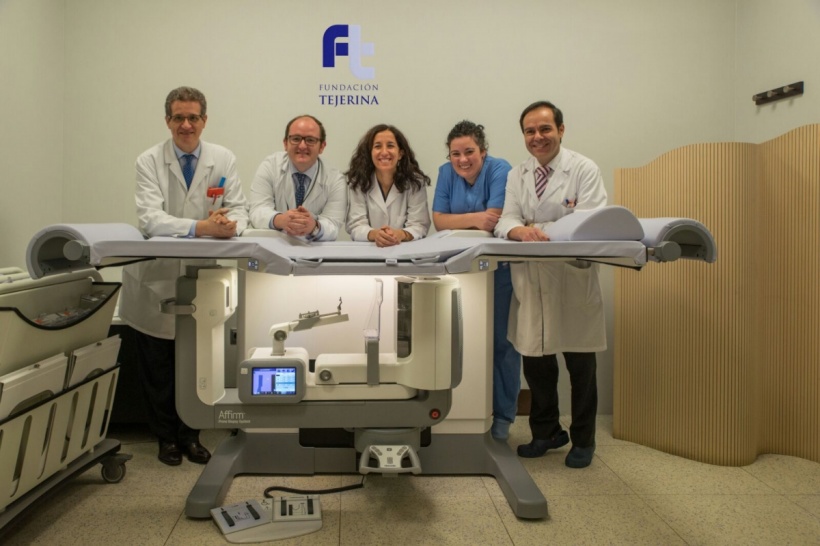 Clinicians trust prone patient positioning for breast biopsy because it supports the patient stably throughout the procedure while isolating them from the biopsy needle – certainly improving patients’ experience.

The Centro de Patologia de la Mama, Tejerina Foundation, in Madrid, Spain became one of the first sites in the world to offer the new system. Alejandro Tejerina MD, a radiologist with the Centre, reports that the feedback from the first wave of patients is very positive. ‘We are performing these [prone biopsy] procedures now with an average of 20 minutes,’ he said. ‘That’s a big change, not only for our time but also for the patient experience. I have a colleague in the Netherlands who also had one of the first systems installed, and she said she did one procedure in just 12 minutes. That is perhaps exceptional, but it shows what is now possible.’

According to Tejerina, conventional breast biopsy systems are restricted to 2-D imaging with a narrow window for targeting the lesions. Often it requires multiple X-ray exposures to find and position the suspect tumour for the biopsy needle. With tomosynthesis imaging on the new Affirm table, he said there is a much wider field of view and, critically, the biopsy device can now be positioned anywhere in a 360-degree circle.

Hologic built many other innovative features into the new Affirm prone system that make it easier to work with and faster for the procedure, Tejerina noted. The Hologic MultiCare Platinum system had to be positioned manually, ‘now the system does this for us automatically, which saves time. The software really streamlines our workflow, so that goes faster. The paddles for compressing the breast are clear instead of metal, and this makes things easier.’

We are performing these [prone biopsy] procedures now with an average of 20 minutes. That’s a big change, not only for our time but also for the patient experience.

Even the positioning of the patient improves the experience, he said. With upright systems, the woman undergoing the biopsy is looking directly at the biopsy needle. If the woman is lying down, she dos not need to witness the procedure directly.

The new Affirm prone system offers a more efficient, more accurate procedure and the woman’s breast is under compression for less time, which adds to her comfort, he said. The Foundation has led the way in women’s breast health for over 40 years. Offering tomosynthesis guided breast biopsies on the Affirm prone 2-D/3-D biopsy table is another first for the Centre, Hologic pointed out. ‘In 2000, the Centre pioneered the use of digital mammography in Spain. It was the first centre to install a stereotactic guided prone biopsy table in 1997.

‘In 2010, it led the way again, installing a Hologic Selenia Dimensions breast tomosynthesis system, the first site in Spain to use the innovative technology to improve the early detection of breast cancer. Later in 2010, the Centre was the first site in Spain to combine the Hologic Affirm upright biopsy system with the Hologic tomosynthesis system.

Advancing the Breast Continuum of Care

The pandemic has presented healthcare systems with new challenges, resulting in backlogs of routine screenings and delayed procedures which threaten the health and wellbeing of patients, as well as… 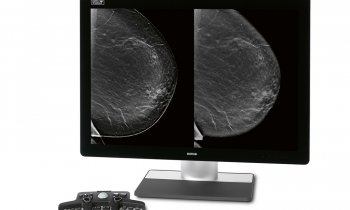