A cup of coffee in Beijing is more expensive than in the USA. When Starbucks first came to China, I could not imagine how coffee could compete with ‘all the tea in China’. Is it the taste or the caffeine addiction? As Starbucks’ CEO clearly stated when I ran into him in a Beijing Starbucks: ‘We don’t sell coffee, we sell atmosphere.’ Starbucks coffee and foreign medical devices: ‘Will the addiction continue?’

So what has Starbucks to do with the future of medical device sales in China? It is a good bell-weather for spending that will continue to go on despite the slowdown in the parts of the economy that have strongly influenced GDP growth. Namely, these have been real estate, infrastructure building and exports, but the party has stated that the future of the economy will be based on internal consumer spending. No longer will personal savings, held out of the economy, be encouraged or required. With major China Healthcare Reform in 2009-11, the 12th five year plan priority of the healthcare system and medical insurance programmes, and the promised goal of universal healthcare coverage by 2020 (they must have been listening to Bernie Sanders) the result should be to free up a glut of family savings that has been kept under mattresses for medical emergencies.

What makes medical device sales different from coffee is that the government has been targeting healthcare as a high priority in spending to stimulate the economy. This expectation and addiction to high quality healthcare will keep hospital spending growing in China.

Those government incentives have stimulated healthcare infrastructure spending, mostly in lower level facilities and under-served locations, which have been strongholds of the local manufacturers. Not surprisingly, we have seen many Chinese manufacturers’ revenue grow disproportionately to the foreign brands. Not only have they expanded manufacturing facilities to keep up, they have also, sometimes, been successful in distributing foreign brands with their marketing and sales focus on these, lower level markets. The former #2 IVD manufacturer, Shanghai Kehua, last year attributed 50% of their revenue to sales of the Japanese Sysmex imported product. The downside of this sales explosion for the domestic companies has been the taking on of considerable corporate debt for expansion. China’s debt reached 282% of GDP, higher than some advanced economies, including the USA’s of 269%. Different from the US debt, household and government debt is a much smaller part of the debt picture. Most of the debt in China is corporate debt.

The state own banks have prioritised loans to state owned companies, leaving private or public companies to borrow from the shadow banking system. Today, the corporate debt load has grown to the point where fewer funds will be available and debt servicing of local medical device companies will become a large burden. A meltdown of the Chinese economy is unlikely, but the burden on the Chinese medical device companies will likely affect any expansion plans. 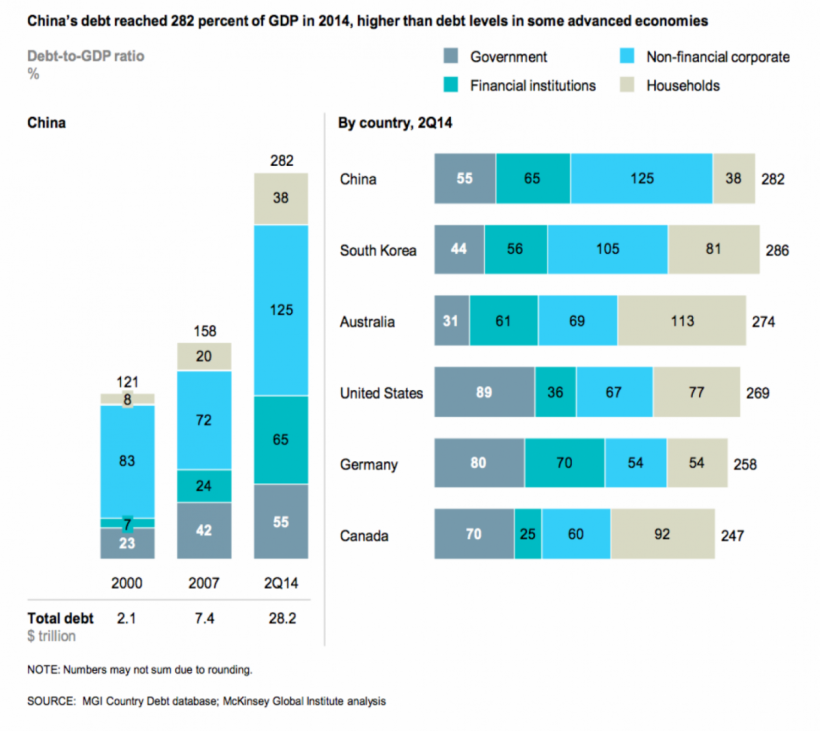 Experts cannot agree on just how big this shadow banking is. The Brookings Institution estimated last year that it could be between US$769 million to US$7 trillion. Brookings concluded that the shadow banking industry is still small enough to be a low risk to any financial crash similar to what happened in the USA in 2008. China still has very large reserves to offset any meltdown in the industry, so it seems the overall Chinese economy will remain healthy. But, the country’s device manufacturers will be affected.

It remains to be seen if these companies can continue to grow as they have. We see an increase in M&A and partnerships between Chinese and foreign medical device companies and that continues to be ripe, with China trying to gain the technology, innovation culture, and management expertise, and foreign companies gaining access to the fastest growing medical device markets.

The addiction to foreign made goods, in the past, has been due to the lack of innovation and poor quality and service of locally made products. Also, similar to Starbucks, ‘face’ is also important to the decision makers. Those with foreign equipment to tout in their published studies, and brag to their colleagues, are regarded as being on the leading edge.

In the past few years, many Chinese companies have made dramatic strides in quality. Despite popular perceptions that China’s Food and Drug Administration has been unfair to foreign manufacturers and gone easy on locals, this has not been the case at the national level. As a result, Chinese medical device companies have been, kicking and screaming, forced to upgrade, document and follow their formal quality systems. Even so, the lure of famous foreign brands has remained.

In 2014 and 2015 medical device spending did slow down some from its peak growth years. Much of these slowdowns were caused more by the crackdown on corruption than on the slowing economy.

President Xi Jingping, since taking the reins of government, has made anticorruption a cornerstone of his legacy and instituted policies to prevent official corruption. He is not letting up. The impact has been more on drugs than devices, but it appears that the effect on all medical products will be felt until it all evens out and the purchasing influences become more like those in the developed world.

Despite the factors slowing down revenue growth for foreign medical device companies (we expect IVD sales to grow by 15-20% in 2016), the positive influences of healthcare reform, patient payment improvements, and innovation in the industry, will maintain the growth. Foreign IVD leaders are not shying away from the opportunities. Roche had been predicting that China would become their #3 revenue generator by 2015, up from 10th highest in 2010. Roche revenue from China exceeded US$1 billion in 2015 and they will invest US$463 million in a new diagnostic manufacturing facility in Suzhou.

So, the medical device market for foreign companies will continue to grow in the higher level city facilities but, to be successful in the faster growing lower levels, some cream and sugar may have to be stirred into the old ways of doing business.

Facing up to many new challenges

Medical laboratories must be pro-active if they are to meet the new challenges being presented to the sector globally, according to Dr William Morice from the renowned Mayo Clinic in America.

The free ride is over!

At Europe’s most prestigious medical conferences, as many as half of the doctors attending are only there because of the generous sponsorship by pharmaceutical and medical technology companies. The…