You have to start slowly. We started with simple procedures and step by step we approached more complex interventions. That turned out to be a good strategy

In addition to the hospital, Marien Gesellschaft Siegen operates six assisted living and nursing care facilities, two out-patient rehabilitation centres, a therapy centre, a hospice and fifteen day clinics in three healthcare centres. The decision in favour of the Senhance system was largely driven by Professor Stephan und Professor Dr Frank Willeke, the latter being Medical Director of the Clinic for General Surgery, Visceral Surgery and Vascular Surgery. “Those two were very keen on using innovative technologies in order to advance minimally invasive surgery,” remembers Hans-Jürgen Winkelmann, Chief Executive Officer of Marien-Gesellschaft Siegen. During a visit to a training centre in Milan, Italy, in late 2016, the two colleagues came across the Senhance system. “They were immediately enthusiastic about the system and wanted to be the first ones in Germany to introduce it,” says Winkelmann. Not even six months later, the first surgery with the system was performed in Siegen. Initially, it was used for hernia surgery, later for rectal, oesophageal and diaphragm surgery. In addition it is used in gynaecology, inter alia for hysterectomies. “You have to start slowly” when considering the use of robotic systems Winkelmann recommends. “Before you tackle large surgeries you need to gather experience and go through a learning curve. We started with simple procedures and step by step we approached more complex interventions. That turned out to be a good strategy.”

Restructuring is a building block of success

In order to create a suitable environment for the Senhance system, an OR that had previously been used for day-patient procedures, was – with comparatively little effort – turned into a robotic OR. The day-patients were moved for the surgeons and the entire OR team to be able to focus on the robotic system. “In the beginning, it was important to schedule more time for each intervention and for the entire staff – not only the surgeon. They all need time to continually improve,” says Winkelmann. “A certain degree of restructuring is unavoidable if you want to achieve optimal results.” And these results speak for themselves: so far, no patient has refused the use of the robotic system. “The patients simply trust our team”, says the CEO. The system provides the surgeon, who is sitting comfortably at an open console patient-side, with high-resolution and high-quality images, in up to 6X magnification. The camera is controlled by the surgeon’s eye movement; the instruments entering the patient body are controlled manually by the surgeon. A built-in tremor filter eliminates the minute trembling of human hands. This enables a degree of precision that human hands without technological support would never be able to achieve. The benefits for the patient? More security, fewer incisions, less pain, faster healing. 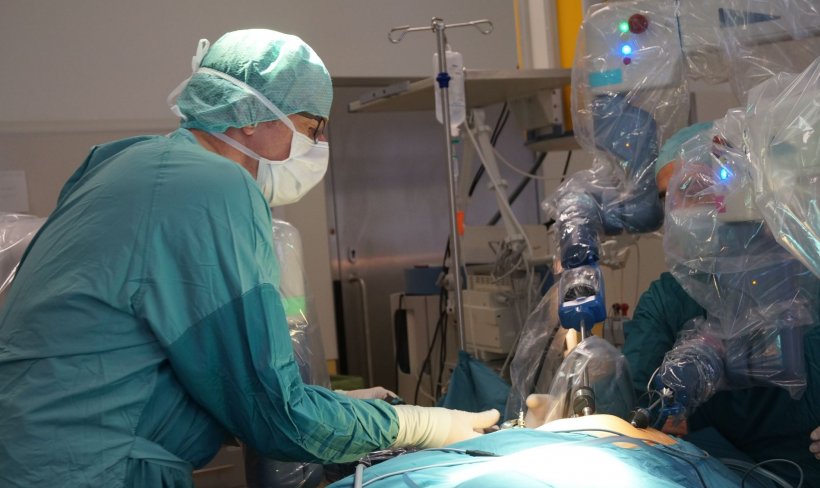 Today, Professor Stephan’s expertise is not only known among the patients in the Siegen area, it is known worldwide. There are 25 Senhance reference centres globally but the hospital in Siegen is the facility with the highest number of procedures. Unsurprisingly, the German surgeon is a sought-after speaker at congresses in the USA and in Japan where he talks about his experiences and presents videos showing the techniques he developed. At the same time, guests from all over the world come to the St. Marien Hospital to learn from Professor Stephan and his team. Moreover, Professors Willeke and Stephan are eager for the junior surgeons to familiarize themselves with the future of surgery – the robotic systems. Winkelmann has not doubts that robotic surgery will prevail: “In orthopaedics and urology, many such systems are already well established. I expect in the near future each central OR area to have two or even three dedicated robotic rooms.”

Today, financing the technology can still be a problem and thus many a hospital manager has to offer very good arguments in favour of a robotic system. In order to gather reliable data the Siegen hospital is conducting several studies to confirm the superior outcomes of robotic surgeries. “If we manage to provide evidence,” says Winkelmann, “these services will be easier to finance and thus they will have a better chance to become established procedures.” (SB)

Hans-Jürgen Winkelmann has been Chief Executive Officer of Marien Gesellschaft Siegen gGmbH since 2018. A banker and economist by training, he previously managed a subsidiary, the St. Marien Hospital Siegen. Winkelmann is chairman of the regional hospital association (Zweckverband der Krankenhäuser Südwestfalen e.V.) and member of the board of the hospital association North-Rhine Westphalia (KGNW).