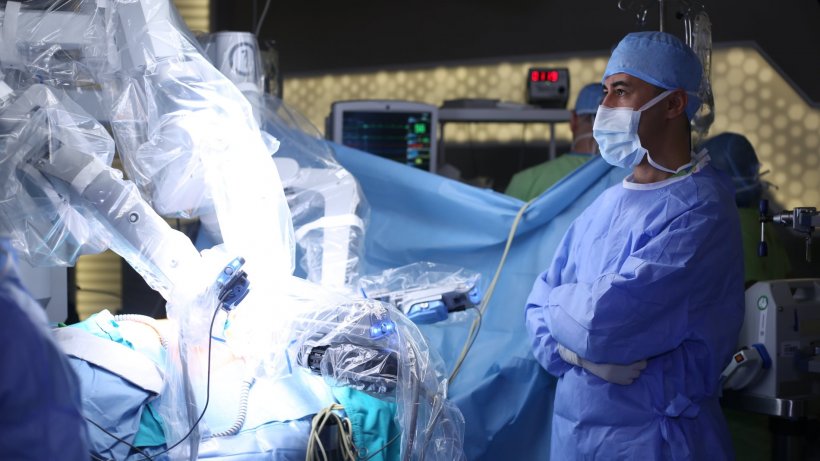 The surgeon watches while the robot does all the work: This is how many patients picture OR robotics. However, reality is quite a bit different.

The first use of a robot-supported surgical intervention was reported in 1985, when the robot arm PUMA 560 placed a needle for a cerebral biopsy using CT guidance. Since then, strong growth in the market for robotic surgery has occurred, due to an increasing automation demand in the healthcare as a whole and greater concentration on minimally invasive surgery (MIS) for faster recovery.

In neurosurgery, for example, image-controlled robots aid in the examination of brain lesions without serious damage to adjacent tissue. General surgeons can perform gall bladder, hernia, cancer and colon operations with a robot. Robots are used in orthopaedic surgery to form the femur bone so that a prosthetic hip joint replacement fits exactly.

One such myth is that the procedure is programmed and the robot performs the operation on its own, automatically, without any human involvement. In reality, robot surgery is an operation that the surgeon performs aided by a robot system through which he controls 100 percent of what happens.

Surgical robotic systems are composed of miniaturised surgical instruments mounted on robot arms. The surgeon controls every movement of the robot arm and instrument directly in real-time. Every movement the surgeon performs with hands on the console is performed simultaneously by the robot control. In other words, the robot acts as the extended arm of the surgeon. Another frequently propagated myth is that the surgeon performs the operation in another room. The surgeon is always present in the room and the console used to control the robot is only a few meters away from the patient. Moreover, the patient is constantly monitored by an assistant next to the bed, along with members of the anaesthesia team and a nurse.

The robot-supported radical prostatectomy is becoming the treatment of choice more frequently by many men, despite the potentially higher cost and limited evidence of its superiority over other treatments

Robot systems permit outstanding visualisation and very precise movements. These properties enable the surgeon to perform minimally invasive interventions with high precision, control and flexibility. All this leads to a generally shorter hospitalisation, less post-operative pain and a faster return to active life compared to laparoscopy or open operations. However, robot-supported surgical systems are expensive and, as a rule, require longer operating times as well as intensive training and frequent practice.

Often, the evidence for the advantages of such surgical techniques is unconvincing. The risks of robot-supported operations are comparable with those of common surgery. In fact, clinical studies of robot-supported surgery for indications in the chest and abdomen as yet have only exhibited a few advantages for this cost-intensive surgical method, according to a current analysis by the Ludwig-Boltzmann-Institute for Health Technology Assessment (LBI-HTA), in which the relevant international clinical studies have been assessed. ‘Altogether, it can be said that, in the case of the indications analysed, there are few signs of clear advantages for the effectiveness and safety of this new surgical technique,’ said PD Dr Claudia Wild, director of the LBI-HTA.

One example is a study by researchers for UNSW Medicine, at the Ingham Institute and the South Western Sydney Local Health District. These show that prostate cancer patients believed erroneously that the robot operation constituted a more definitive cure for prostate cancer than other treatments, such as radiation therapy. ‘The robot-supported radical prostatectomy is becoming the treatment of choice more frequently by many men, despite the potentially higher cost and limited evidence of its superiority over other treatments,’ Dr Ben Smith of the Ingham Institute pointed out.

The study also found that patients often disregard the various side effects of their treatment options but, above all, follow only their physicians’ recommendations. However, robot technology might not be the right option for every patient. Therefore, patients ought to gather information about all treatment options before they make a decision that has a substantial impact on their quality of life.

Article • Digitisation in the OR

One robot supports the surgeon’s control of tiny instruments, while another automatically keeps an eye on what is happening: With this novel combination, surgeons in Münster have successfully…