We chose the complex task of anastomosis as proof of concept because this soft tissue surgery is performed over one million times in the U.S. annually

Nobody is perfect, not even surgeons. It does not matter how many years they were intensively trained, they are not infallible and do indeed make mistakes. However, what would happen if these doctors pooled their combined knowledge and experiences to create an optimal surgical standard of care to be met by machines? Unlike humans, computers rely on precise calculations and programmed behavior and they do not tire.

This is the starting point for the development of surgical robots which may soon perform most surgeries. Many operations are in fact already accomplished with the assistance of robots - from sewing up tiny wounds to executing heart procedures. Machines such as the da Vinci Surgical System mimic every move a surgeon makes as they are remotely controlled by the surgeon. Efforts in automating surgery have made headway with regard to hard tissues, such as in bone cutting, but the execution of soft tissue surgery has remained entirely manual, largely because the elasticity and plasticity of soft tissue causes unpredictable changes during surgery that require the surgeon to make adjustments constantly.

However, a recent study conducted by researchers at CNHS and Johns Hopkins University in Baltimore suggests that robots in the operating room may soon go a step further, performing on soft tissue completely on their own, from start to finish. The surgeons would continue to monitor the instrument. “Until now, autonomous robot surgery has been limited to applications with rigid anatomy, such as bone cutting, because they are more predictable,” said Axel Krieger, PhD, and technical lead for Smart Tools at Sheikh Zayed Institute for Pediatric Surgical Innovation. “By using novel tissue tracking and applied force measurement, coupled with suture automation software, our robotic system can detect arbitrary tissue motions in real time and automatically adjust.” 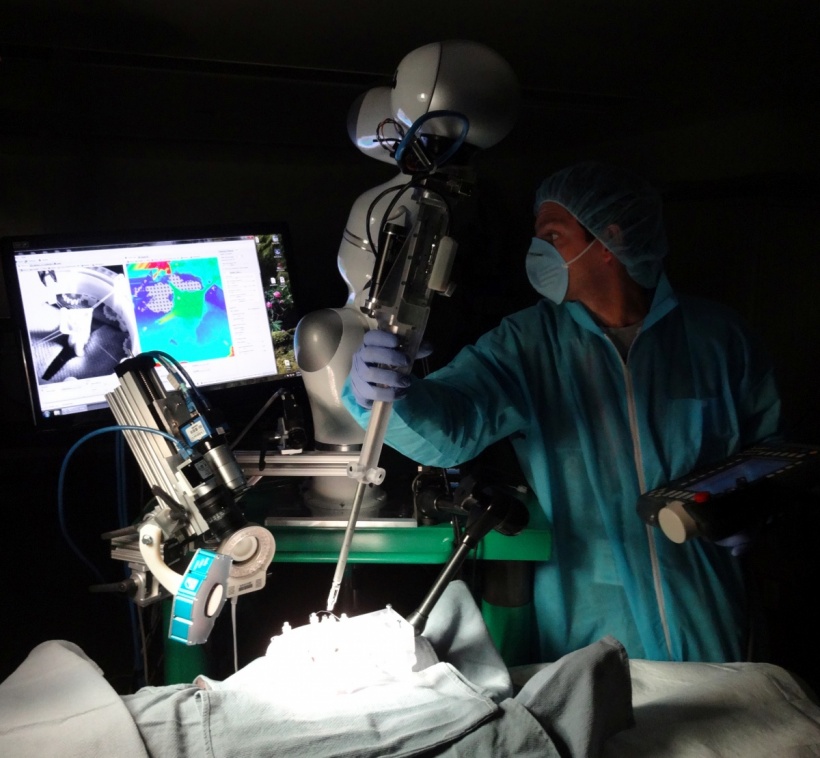 STAR is capable of working on its own and performing surgical motions more flexible than a surgeon’s hand. It uses a tracking system that integrates near infrared florescent (NIRF) markers and 3D plenoptic vision, which captures light field information to provide images of a scene in three dimensions. The visual system can also tell what type of tissue the robot is looking at, its temperature, and whether it has a natural rhythm such as a heartbeat.

This system enables accurate, uninhibited tracking of tissue motion and change throughout the surgical procedure. This tracking is combined with an intelligent algorithm that guides the surgical plan and autonomously makes adjustments to the plan in real time as tissue moves and other changes occur. The STAR system also employs force sensing, submillimeter positioning and actuated surgical tools. It has a bed-side lightweight robot arm extended with an articulated laparoscopic suturing tool for a combined eight degrees-of-freedom robot.

To compare the effectiveness of STAR to other available surgical procedures, the researchers tested their robot against manual surgery by expert surgeons, laparoscopy, and robot-assisted surgery with the da Vinci Surgical System. Under their supervision, the system proved superior to all approaches in suturing and reconnecting bowel segments, known as intestinal anastomosis, both ex vivo and in vivo in pigs. “We chose the complex task of anastomosis as proof of concept because this soft tissue surgery is performed over one million times in the U.S. annually,” said Dr. Kim.

All surgeries were compared based on the metrics of anastomosis including the consistency of suturing based on average suture spacing, the pressure at which the anastomosis leaked, the number of mistakes that required removing the needle from the tissue, completion time and lumen reduction, which measures any constriction in the size of the tubular opening. “Our results demonstrate the potential for autonomous robots to improve the efficacy, consistency, functional outcome and accessibility of surgical techniques,” said Kim. “The intent of this demonstration is not to replace surgeons, but to expand human capacity and capability through enhanced vision, dexterity and complementary machine intelligence for improved surgical outcomes.”

Many components of STAR, including the robotic arm and imaging tools, are readily available, which could help bypass regulatory hurdles and speed up development, according to Kim. The robot could potentially tackle tumor surgery, gallbladder operations, appendix removal, and many other soft tissue surgeries. Dr. Kim said that since supervised, autonomous robotic surgery for soft tissue procedures has been proven effective, a next step in the development cycle would be further miniaturization of tools and improved sensors to allow for wider use of the STAR system. He added that, with the right partner, some or all of the technology can be brought into the clinical environment and bedside within the next two years.

Article • Digitisation in the OR

One robot supports the surgeon’s control of tiny instruments, while another automatically keeps an eye on what is happening: With this novel combination, surgeons in Münster have successfully…