If blood can no longer be pumped through arteries properly, this can lead to a heart attack or stroke. Doctors are typically only able to diagnose the disease once it reaches an advanced stage. Computer scientists at the University of Kaiserslautern are developing a software program that will allow doctors to detect calcification earlier. To do so, they use image data from computer tomography (CT). They will present the technology at the medical technology exhibition, Medica, from 13 to 16 November in Dusseldorf, at the research stand (Hall 7a, Stand B06) of Rhineland-Palatinate. 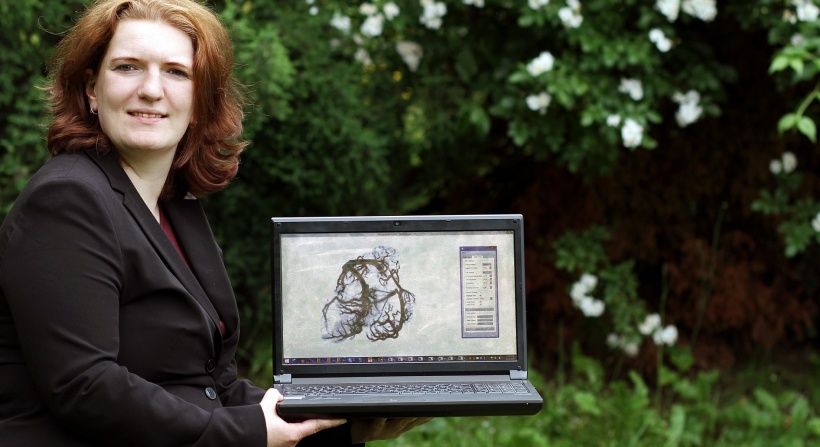 According to the German Vascular League, around four million people in Germany suffer from arteriosclerosis. It is even responsible for half of all fatalities in industrialised countries. “Often, the disease is only discovered at an advanced stage,” says Christina Gillmann, doctoral student at the chair for ‘Computer Graphics and Human Computer Interaction’ of Professor Dr Hans Hagen. “For example, doctors are only able to detect deposits in blood vessels on CT images once thicker layers are already present on the vessel walls.” At that point, an operation is typically the only option available for treating patients. However, it is possible to detect the disease early enough in those who eat healthily and exercise regularly.

The computer scientists in Gillmann’s team are currently developing a computer program that seeks to help doctors give an early diagnosis. To do so, they use existing CT images. This x-ray technology provides physicians layered patient images that are usually shown in greyscale. “The resolution of the images is not very high,” the researcher continues. “The data has to be prepared differently in order to detect arteriosclerosis at an early stage.” Although there are already techniques that can allow such values to be obtained from CT data, they are simply far too complicated and unsuitable for routine medical practice.

For their program, the computer scientists filter out the additional information from the CT scans. This makes it possible, for example, to depict the branches of the arteries accurately. The researchers at Kaiserslautern are cooperating closely with physicians from Dayton in the United States, led by Professor Dr Thomas Wischgoll, and from Colombia under Professor Dr José Tiberio Hernández Peñaloza. The procedure is not only interesting for doctors, but also industrial companies. They could use the technology, for example, to screen their products more precisely and thereby identify any areas of damage.

However, it will take a few more years of development work before the system may one day be used in hospitals. At Medica, the researchers are presenting their technology at the research stand of Rhineland-Palatinate.

The Working Group for Computer Graphics and Human Computer Interaction has already been conducting research for a long time on preparing data from imaging processes for medicine, such that it can be used simply and reliably in routine clinical practice. They have thereby succeeded, for instance, in using their procedure to separate tumours more distinctly from healthy tissue in images. The computer scientists are working closely with various partners in their projects, including the University of Leipzig Medical Center and the Premier Health Clinic in the US state of Ohio.

Cardiovascular diseases are the most common cause of fatalities in Germany. Medical wearables which measure vital parameters such as the blood pressure, heart rate and blood oxygen levels in real…

OR Technology · OR Cloud Archive