Anything you can do, artificial intelligence can do better

The 33rd annual meeting of the European Society of Magnetic Resonance in Medicine and Biology (ESMRMB – in Vienna, in Autumn 2016) was the scene of a hot debate: ‘Man versus machine in Radiology: the computer will take over’. Wiro Niessen, Professor of Biomedical Image Processing at Erasmus University Rotterdam, had the task to substantiate that proposition.

‘The computer will take over from the radiologists,’ he declared, believing that machine learning, a form of artificial intelligence, could take over the interpretation of radiological images in about 20 years’ time. He reminds us that more than a decade has passed since the chess programme Deep Blue succeeded in beating the former world chess champion Garry Kasparov. And, only recently, the AlphaGo programme beat the world’s best Go player, Lee Sedol. Formerly, playing the Japanese board game had been considered too complex for software programmes to master. ‘Anything you can do, artificial intelligence can do better,’ Niessen emphasises. ‘Algorithms get better and better and there is no reason why this process will stop,’ he argues.

Cooperation or competition? Opinions on the future of man-machine relations in radiology vary wildly.
shutterstock/Willyam Bradberry

Learning strategies are also constantly improving, and the amount of data that machines can learn from also grows continuously. Truthfully, there is no competition in being better at looking at an image: ‘Combining so much data is the computer’s job,’ the Dutchman stresses. ‘Imaging now contains too much information for humans.’ Lastly, he asks if the most informative images are those that can be visually represented. MRI fingerprinting, MR spectroscopy and multiparametric images deliver results that can no longer even be adequately visualised. ‘We couldn’t do half the work that we do on a day to day basis without computers,’ admits Adrian Dixon MD, Professor Emeritus of Radiology of the University of Cambridge. However, the British radiologist, who self-deprecatingly describes himself as a dinosaur, states: ‘the computer will not take over’.

First he refers to interventional radiology: ‘I doubt whether the computer will ever be able to master this.’ But humans can also not be eliminated from purely diagnostic radiology. Dixon is convinced that any computer cannot replace the teamwork between radiographers, physicists and radiologists. But, although we have to move away from current standards in imaging, the computer is reaching its limits. He uses an example of a motorcyclist after an accident, who must not be moved because of possible injuries to the cervical spine and whose spine therefore can often only be viewed from unusual angles. Additionally, there are no standards at all when it comes to abdominal imaging, Dixon emphasises: ‘There is no such thing as a normal abdominal CT.’

The computer will not take over radiology

This British radiologist is pleased about all technological support for mammography prompts, lung/liver nodule prompts, measurements to resize/perfusion/fat etc., multiparametric analysis, smoothed images, decision-making assistance and structured reporting – ‘But, he insists, ‘the computer will take over a lot of aspects of radiology, but will not take over radiology.’

Harnessing the power of radiomics, and adopting an integrated approach to combine imaging and patient data could lead to better clinical cancer outcomes. The move has opened the door for clinicians… 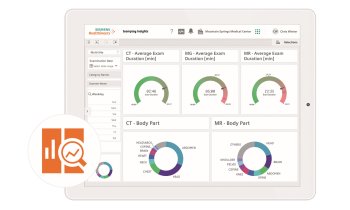