Disparities impede this vision from becoming reality also in radiology, which is confronted with heterogeneities in many areas. As initiating changes takes time on the EU level, radiologists are aiming to speed things up. At this year’s ECR experts are gathering at a dedicated professional challenges session.

One of the most striking differences on the old continent is the brutal gap between salaries in medical imaging. Data collected by the European Society of Radiology (ESR) show that Swiss radiologists in training receive an annual income of €67,500 while their Romanian counterparts earn less than €3,000.

Examinations also differ from country to country because radiation doses used are not always the same. For instance, the mean effective dose for chest thorax examination is 0.20 mSv in Germany, whilst it is lower than 0.05 mSv in the UK, according to EU data. Education is another key area of division. Most countries adopted the five-year training curriculum for radiology promoted by the ESR, but others offer much less. (Diagram 2) This gap hampers radiologists’ mobility in what should be an open space, according to the session moderator Lluís Donoso-Bach, Director of the Diagnostic Imaging Department of the Hospital Clinic of the University of Barcelona, Spain: ‘If we want to promote the EU as a substantial concept, we radiologists must be able to work everywhere. This is why education needs to be as similar and recognised as possible in every country.’

The ESR recently launched a ‘Call for a European Action Plan for Medical Imaging’, hoping to overcome the rigid division of responsibilities between the various EU directorates that seems to impede reforms. The situation of imaging equipment is dramatically heterogeneous as well, and the density of CT and MR machines differs a lot in the EU, according to data acquired by the Organisation for Economic Co-operation and Development (OECD) in 2012.

Least equipped of all was Hungary, with 2.8 MR and 7.7 CT scanners per million inhabitants. Romania, Bulgaria and the Czech Republic were also below European averages, as well as, perhaps more surprisingly, the UK and France. Conversely, Greece, Italy, Austria and Scandinavian countries did generally well. More importantly than the sheer number of machines is their national distribution, Boris Brkljačić, professor of radiology at the Medical School, University of Zagreb, Croatia, points. ‘What matters is whether the where. It is more important to have excellent CT machines in hospitals that treat polytrauma patients than, say, a rehabilitation hospital.’

Session speaker Brkljačić also underlines that equipment age as a key factor in imaging quality. Experts agree that the golden rule is to have 60% of equipment aged between one and five years old, and 30% between six and ten. It is also acceptable to have 10% of equipment older than ten but, at this stage, one should think of a replacement strategy. This issue is gaining momentum in Europe because equipment is rapidly ageing. According to the European Coordination Committee of the Radiological Electromedical and Healthcare IT Industry (COCIR), 60% of CT machines were up to five years old in 2008. [Age profile of CT and MR equipment in Europe (2009) http://cocir.org/fileadmin/Publications_2009/new_members_ws_-_del._3_-_cocir_age_profile_17_june_2009.pdf].

In 2013, their number dropped to 49.5%. ‘That’s a considerable drop within just five years, and it means that equipment is not being renewed, probably as an impact of the financial crisis,’ Brkljačić notes. ‘In Croatian public hospitals, for instance, new CT scanners only represent 11% of all CT equipment, which is an absolute disaster. That’s why the ESR is pushing this issue now more than ever.’ (http://link.springer.com/article/10.1007%2Fs13244-014-0345-1) 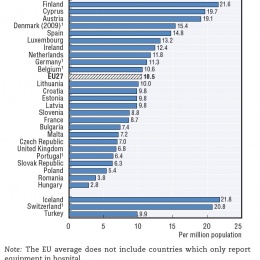 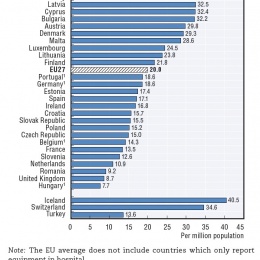 Regardless of economic contractions, health managers should not hesitate in investing in new equipment, because it improves imaging quality tremendously, Brkljačić insists. ‘These examinations are highly profitable to patients and healthcare systems. In many countries, there are waiting lists and huge pressure on radiologists to image as many patients as possible. ‘Governments should ensure that hospitals have proper equipment, especially those that treat acute patients and perform complex procedures. Politicians tend to have their own policy and buy things that are not priorities. For instance, in Croatia you’ll find the best CT equipment in a rehabilitation hospital that doesn’t treat acute patients, while a few kilometres away, the structure for trauma patients has only 16-slice scanners.’ His conclusion: ‘I think it’s very important for radiologists to have proper arguments to fight on these issues.’

ECR 2015 evoked Shakespeare´s repertoire as delegates were asked to ponder the ethical implications of incidental findings in large population imaging studies in Vienna.

Liberating radiologists to be expert consultants

Where some decry the commoditisation of radiology, Gabriel Krestin MD, sees an opportunity to redefine the profession, for radiologists to rise up from basement reading rooms to consult as equals…

Innovation management and the future of radiology

At this year’s ECR the first of two Management in Radiology (MIR) sessions addressed the issue of innovation management and future challenges.