No doubt about it, Brexit – the majority vote cast by just over 52% of citizens for Britain to leave the European Union – has thrown the nation into political and emotional turmoil and, yes, ordinary people are at last asking more questions than many among them did prior to pencilling in their X to march their country down the separatist lane.

Many of those people simplistically believed what the Vote to Leave campaigners erroneously claimed to be £350 billion per week, contributed by Britain to the EU coffers, could be brought home to fund the financially stressed National Health Service (NHS) – the nation’s ‘love child’, of which most are proud and determined to protect.

Phew! Now the realisation is sinking in regarding many facets of the country’s extraordinary public organisation the NHS, Europe’s largest employer, and fifth biggest employer in the world – 1.7 million people – are NHS workers (ironically, in terms of health, McDonald’s employs .2 million above this and Walmart employs .4 above this!)

Inevitably, Britain’s NHS not only employs nationals but internationals, as needs must. Now the focus begins to sharpen – even though each of our four countries, England, Scotland, Wales and Northern Ireland, runs it own NHS – as a whole we directly employ over 640,000 professionally qualified clinical workers, including 110,000 doctors and over 315,000 nurses.

So, the big question arises: when all the aspects and chaos created by Brexit are addressed and hopefully sorted out, what will happen to our existing EU employees and future migrant employees? Some very confident people proclaim there will be no problem for existing employees. Others, sensibly to my mind, say ‘We don’t know, yet.’

Employing foreign nationals is fraught with uncertainties anyway. There’s the burning question of training and language competency, for which would-be migrant doctors are tested. However, the case of the EU doctor, employed at huge cost for weekend work, to lower waiting lists (flying in from Europe on a Friday night, operating for two days, and taking home £-thousands) ended, in his case, with prosecution for incorrectly reading and administering the wrong dosage and killing a patient – claimed to be caused by a language glitch. Hmm.

Surmounting that case, 11% of all staff estimated to work for the NHS and in community health services are not British – they are foreign nationals from more than 200 countries.

Among them we are also blessed with the presence of 3.6% clinically qualified EU doctors, nurses and therapists, among others (but a percentage that excludes general practitioners and those working in administration on the NHS staff list). Just topping this percentage is the 4% of NHS medical people who come from Commonwealth countries.

In terms of the highest numbers of people from specific EU countries who work for NHS England alone, here are a few figures:

The move to cut migration

Britain’s present need of migrant workers for the NHS can only increase. A member of the Institute for Public Policy Research think-tank, Tim Finch, pointed out that statistics held lessons for immigration policy. ‘If the single thread of immigration policy is just to get the overall figure down, by any means, you’ve got to look at the consequences of that on the NHS.’

Speaking at the International Festival of Public Health held in Manchester, the Medical Director of NHS England, Sir Bruce Keogh, also predicted that the already stretched NHS will face very tough times in the coming year due to the uncertainties caused by Brexit on top of its financial settlement. Brexit, he warned, could lead to lower-quality services, longer waiting lists and the need for ‘unsavory questions about which services we can afford and which services we cannot’. (Ah! Little imagination is needed to forecast the outcry from certain members of the British public – particularly those who believed healthcare could improve through leaving the EU community.)

Sadly, some of our much-valued EU medical care contributors have also been unnerved by reports of the extraordinary xenophobia that raised its ugly head during and after referendum voting – even resulting in the murder of a 42-year-old woman MP. Such incidents also distressed most of the rest of our countrymen – including a surprising number of those who voted for Brexit. 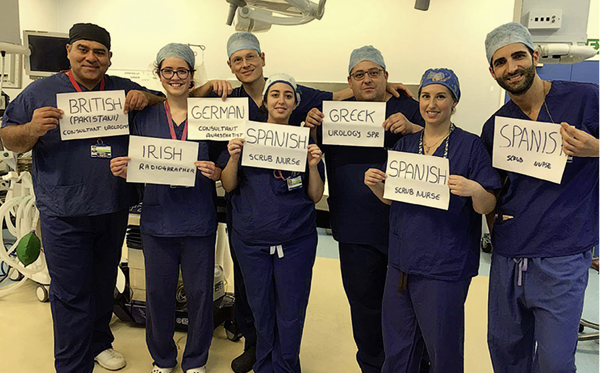 Referendum result is not binding

Fortunately, it appears we have time to pull ourselves together and at some distant stage sort out whether we are in or out of the EU – because, legally, the referendum result is not binding.

As most of us have now learned, the only way to even begin Britain’s exit is to trigger Article 50 (1) of the Treaty on the European Union for withdrawal from the EU, but only then ‘in accordance with its own constitutional requirements’. In the UK, those requirements include parliamentary approval – but, the argument goes, withholding that would end our precious respect for democracy!

Some diehards among the ‘remainers’ also speak of a renegotiation of Britain’s EU membership terms (despite what other EU countries might petulantly think); others are simply stiffening upper lips and proclaiming ‘We’ve done it; now we must just get on with it’

What those in British healthcare are focused on is further renegotiation to ensure the free movement of qualified EU medical workers to take up British NHS employment. It has been said that this could prove difficult in the future – but not for some time.

Much is already afoot: The present chief executive of the General Medical Council, Niall Dickson, commented: ‘Withdrawing from Europe will have implications for the way we regulate doctors but we understand that the vote to leave the EU will have no impact on the registration status of any doctor already on the register.

‘We will now explore how doctors from the EU will be granted access to the UK medical register and how any concerns about those doctors will be shared between us and other countries. We will also seek to understand the implications for UK doctors wishing to work in the EU once the UK is no longer a member state.’

How to achieve ‘leave’

The process of a EU exit runs in several stages. First, the European Council - without the UK - must agree guidelines for negotiations and then the European Commission is to negotiate an agreement on behalf of the EU. The agreement would need to be approved by Britain as well as 20 of the 27 remaining member states, representing 65% of those states’ population. (Why did we not adopt that before the referendum?!) The European Parliament (EP) then would need to approve the agreement with a simple majority. British Members of the EP could vote.

Not surprisingly, the process needs two years to complete – after Article 50 is initiated, unless surprisingly Britain repeals the European Communities Act of 1972, but that would breach treaty obligations under international law. Leaving could, according to the UK government, take ‘up to a decade or more’ just to negotiate exit from the EU, the trade deals, and more. Even then a state that has left the EU could request re-joining.

In a nutshell, for now Britain has its EU healthcare staff, and we need to do all we can to show our gratitude and to retain them – as well as, in the interim period before an actual Brexit, to encourage others to work alongside us. We also need to influence whatever future government and medical institution leaders we have, to exercise their greatest efforts to ensure freedom of movement of qualified medical professional EU and other healthcare migrants.

So far, a laudable number of parliamentarians are calling for guarantees to cover EU nationals’ employment in British healthcare.

Can Twitter give insights into the Ukraine's state of health?

Researchers analyzed millions of tweets in the Ukrainian language surrounding the Russian invasion. Their findings paint a worrying picture of the medical conditions in the war-torn country.

The impact of racism and discrimination on global health

Racism, xenophobia, and discrimination are important influences on health globally, but have so far been overlooked by health researchers, policymakers, and practitioners, finds new research.

Rows of ambulances held in queues outside emergency departments waiting to admit patients to hospital is becoming an increasingly familiar scene in the UK. Senior figures across the health sector are…