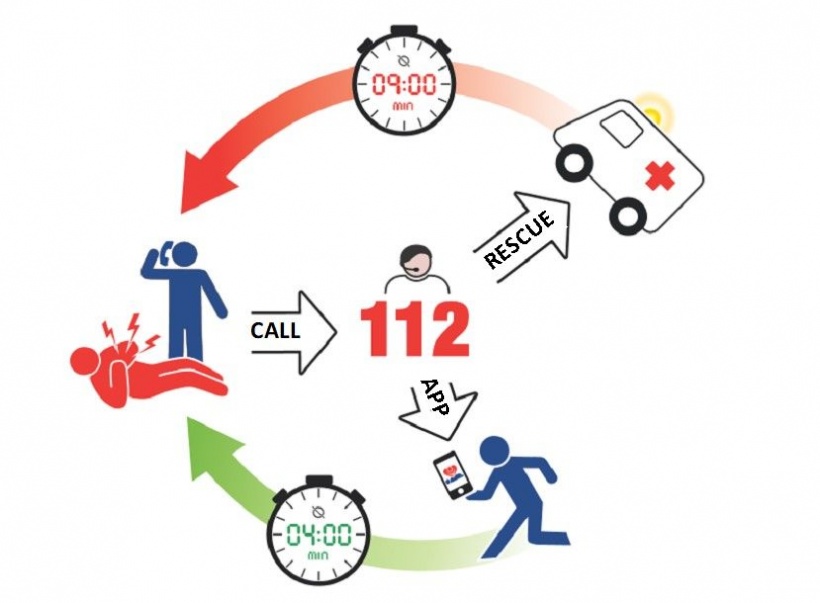 A first responder app can reduce the time it takes until help arrives on site in an emergency.
Source: www.meine-stadt-rettet.de

The question is whether medical apps will have the same benefit as those employed for everyday use. Dr Christian Elsner, Director of the University Hospital Schleswig-Holstein (UKSH), presented his findings on the subject of first responders at the POCT Symposium in Munich. ‘The first responder figures in Europe vary a lot. Four years ago, the figure for Germany was only 25%. Now it’s 31%, but we obviously want to increase it still further,’ he said.

In each emergency case where resuscitation is required, first responders should intervene within a matter of minutes. ‘There are different concepts to achieve this, such as increasing the availability of defibrillators, telephone support for resuscitation, or the utilisation of first responders who are alerted via our app,’ Elsner explains.

A first responder app and emergency unit plugin can locate app users near an emergency potential sudden cardiac arrest. This allows the emergency medical dispatcher to call for additional help alongside the primary rescue chain, if feasible. The UKSH also recruited qualified medical (semi-) professionals with knowledge of CPR, and a comprehensive medico-legal evaluation and guideline development were also undertaken. An atrial fibrillation (AF) app was then developed which can test for atrial fibrillation via the standard flash-LED through the app users.

A clear-cut SOP and medico-legal evaluation were developed and implemented for the first responder app in a partnership with the city of Lübeck. Most of the budget (42%) had to be spent on the medico-legal evaluation and the obstacles presented by legal standards and data security, with the second largest amount spent on the socio-political  discussion on how to implement the technology. User recruitment was successfully carried out via 1:1 marketing and viral marketing. After 12 months, more than 380 people were recruited as CPR lay people, with most of them already being pre-qualified. In the first eleven real cases for the app, 36% of the first responders arrived on site more than three minutes before the emergency rescue vehicles. ‘It used to take  9-12 minutes before emergency staff reached the patient once the alarm was raised, but our dense network has now reduced this to 1-3 minutes,’ Elsner points out.

A test study protocol for the atrial fibrillation app was developed and is being implemented in a primary AF (patients  aged over 65) and secondary AF (patients after ablation) screening population. The use of this app is being discussed with health insurers and various hospitals, with a medico-legal evaluation still in progress.

Point of care testing can receive impulses from the market trends of ‘shareconomy’ and mobile internet technologies. Completely new business models and use cases must be discussed and must seem feasible in a first proof of concept. Achieving these new use cases will take great effort and require a lot of energy, time and money to be invested in a combination of social, legal and medical evaluations, in close cooperation with the technological development of such apps. The findings from the two use cases and field tests should give first insights on how to proceed and which problems to tackle.

The managing director of the German University Hospital Schleswig-Holstein, Lübeck Campus (turnover €300+ million) since 2010 and, from 2015, managing director of its Out-patient Care Centre, Dr Christian Elsner is also acting director of the Diagnostics and Radiology Centre in the  Kiel Campus. He is also Assistant Director of the Hospital Manager degree course at Kiel University. In the past, Elsner was Division Manager for the consultancy Pharma, Healthcare and Medical Technology in Munich, Germany, (2006-2009). Elsner is a member of the board at the European Heart Rhythm Association (EHRA).

Point of Care Diagnostics (POCT) has been established for 20 years. Comprehensive smartphone coverage and shareconomy technology are now helping to push the development from previous business models…

Blood "combo bags" could save lives after major trauma injury

A new blood product combining red blood cells and plasma in one bag is associated with a better survival from a penetrating major trauma injury, a new study has found.