In spring 2015 an earthquake destroyed vast areas of Nepal.

Spring 2015 saw vast areas of Nepal destroyed by an earthquake with a magnitude of 7.8, leaving local doctors trying to cope with huge numbers of seriously injured patients requiring urgent treatment. With a global relief effort underway, a team from the James Paget University Hospital volunteered to visit the earthquake zone, where they could use their medical expertise to assist Nepalese doctors dealing with an overwhelming workload.

Along with three other consultants from JPUH – orthopaedic surgeon Mike Flores, trauma consultant Emeka Nnene, and general surgeon Kamal Aryal, who originates from Nepal – I offered my services to Kirtipur Hospital in Kathmandu. I had no idea what drugs and anaesthetics would be available at the hospital, but I knew that regional anaesthesia would be beneficial and so I took a SonoSite point-of-care ultrasound system with me, along with some local anaesthetics, needles and an Ambu-bag.

At Kirtipur, facilities were limited and the environment far from ideal. The majority of the patients we encountered were waiting for surgery to upper and lower limb injuries. Many were injured trying to escape from buildings, often jumping from some height, and so ankle, wrist and clavicular fractures were common. POC ultrasound was invaluable for treating these people; the instrument’s small size and light weight made it easy to transport, and I used it from the first day to the last.

With just one probe – a linear transducer – I could visualise the upper and lower limbs, allowing me to administer regional anaesthesia to one patient in the recovery room while another was in theatre undergoing surgery. 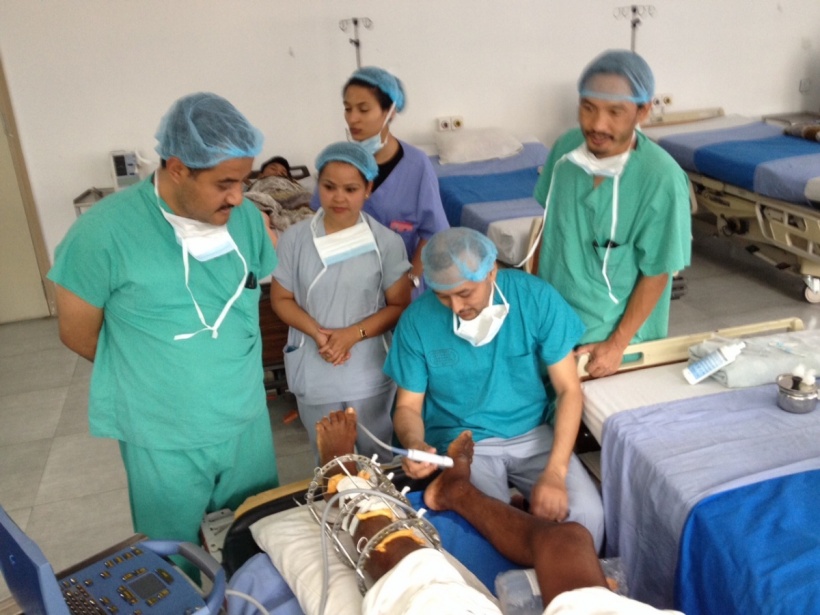 Medical staff from many countries worked together in the Nepal aid programme.

It’s such a wonderful way to give an anaesthetic; you don’t need general anaesthesia, which means people are not sick afterwards and recover faster. Patients are pain free after the procedure and experience fewer side effects, and it’s safer, too, with a lower risk of developing complications. Using ultrasound, you can perform reliable blocks one after the other and, as the onset of anaesthesia is much faster, you don’t have to wait a long time to find out whether or not it has worked. This quality is something that you can only get using ultrasound guidance.

The local anaesthetists, who were already very skilled at performing blocks with nerve stimulation, were fascinated by the use of ultrasound-guided anaesthesia and, after watching a few procedures, they were ready to use the technique themselves. It became a really good teaching experience.

The SonoSite system is very robust, intuitive and simple to use, and they picked it up so quickly. They saw how much the quality of the blocks improved, and I’m sure they will ask the hospital managers to invest in an ultrasound system at the earliest opportunity.

Within a couple of weeks, the workload was manageable and we could return home.

Nepal has since suffered a second earthquake and the monsoon has started. While the medical situation is reasonably well under control – there were fewer deaths and injuries during the second quake, largely because so many people were homeless and living under tarpaulins in the open air – there is still a great deal to do and it will be many years before the country is restored to its previous state.

The Nepal aid programme was a real team effort, with medical staff from many countries working together to treat as many patients as possible, providing support to our Nepalese colleagues, allowing them to take a much needed break.

As anaesthetists at Kirtipur and another hospital have expressed an interest in learning more about ultrasound, I plan to return to Nepal in a few months’ time, accompanied by Mr Aryl, to run a workshop on regional anaesthesia. This time I will take a newer point-of-care ultrasound system and more probes, allowing a range of additional ultrasound topics – echocardiography, abdominal or lung ultrasound, laparoscopic procedures and the use of ultrasound in ICU – to be covered, depending on what people want to learn.

I really appreciate the support we receive from SonoSite for our work in Nepal; it’s a company that genuinely cares. Being able to contribute to the initial relief effort, with the backing of JPUH and the charity Nepal in Need, was very satisfying, and I look forward to returning to the country later this year.

Sponsored • Ready to face the pandemic

Sonosite PX launches in a moment of crisis

Costantino Balestra, Professor of Physiology at Haute Ecole Bruxelles-Brabant in Belgium, uses point-of-care ultrasound (POCUS) in environments that could not be more different from a typical…

Sponsored • After the earthquake

Dr. Jesus Casado Cerrada, Internist at the Hospital Universitario de Getafe and Professor at the Universidad Europea, Madrid, Spain, has travelled to the Rasuwa district of Nepal to help a local NGO… 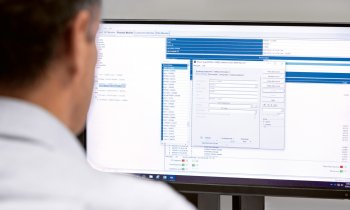