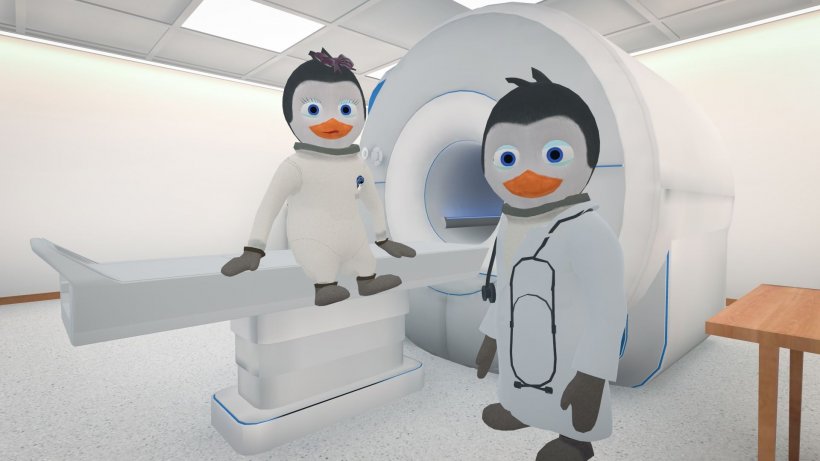 The app was developed under the leadership of the University Duisburg-Essen (UDE) and the Essen University Hospital (UK Essen). It can already be downloaded free of charge for many smartphones. With a funding of $117,000, the trainer is to be expanded to more operating systems and will be released in additional languages. A start-up – founded by alumni of the UDE – is significantly involved.

The children go into the examination more calmly, and they cooperate better

An MRI examination without fear and without anesthesia. That is the goal of the Virtual Reality (VR) app, in which penguins playfully prepare for the procedure. The smartphone becomes a VR viewer – with instructions on how to make them also available for download soon. Thus equipped, children lie down in a virtual MRI and practice staying still despite the droning noises. The virtual reality application was developed by an interdisciplinary team from the UDE, the UK Essen and companies from the medical technology and creative industries. A one-year study at the UK Essen and the Children's Hospitals Amsterdamer Strasse in Cologne confirms the app's success. "The children go into the examination more calmly, and they cooperate better," explains Oliver Basu, MD, from the Center for Children and Youth Medicine at UK Essen.

Now the project "Fearless in the MRI" is entering its second phase: It will be funded with 117,000 US dollars for three years by the US foundation "Child's Play". "A German and English version already exist, and now we are working on French and Spanish variants," explains Stefan Liszio from the Entertainment Computing Group. Together with Basu, he is leading the project. In addition, the development team wants to adapt the trainer to other operating systems; so far, it is only available for Android (Google Play Store). The technical implementation is being handled by "the nix company," a young startup company run by two former UDE students who have helped develop the “Pengunauts" from the very beginning.

Claustrophobia or anxiety can overwhelm small children and people with cognitive difficulties, especially in a confining and noisy MRI scanner tube. Their restless reactions can then render scan…

Siemens Healthineers has recently started offering its customers WeScan, a new service that helps healthcare providers to perform MRI examinations if they lack qualified radiology staff. With the…

Website helps children and parents to prepare for hospitalization

Every year, millions of children around the world are admitted to hospital for having anaesthesia and surgery. Many of them experience preoperative anxiety which negatively affects both their…