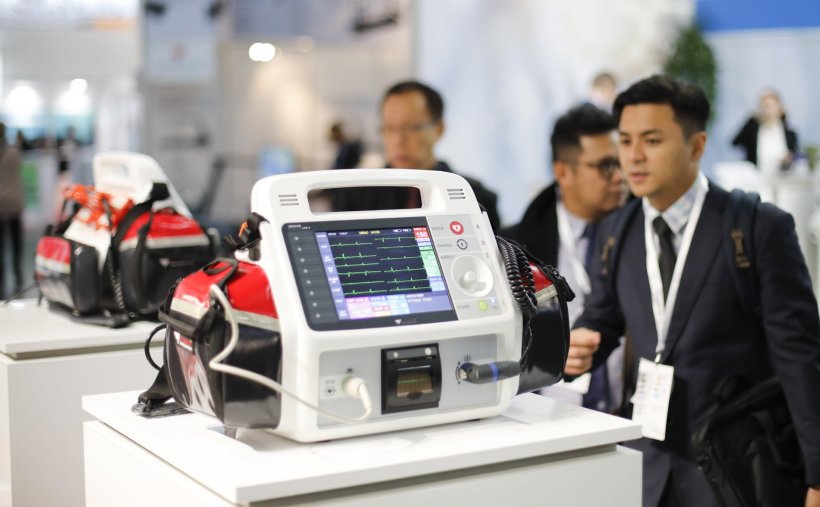 Since Compamed could only be held digitally last year, due to the pandemic, the event now takes place publicly again. Almost 500 registrations from exhibitors prove that there is a high level of interest from medical technology suppliers – a huge step towards reaching normality again.

Both the omnipresent Covid-19 pandemic and its consequences provide much food for thought: ‘Due to the impact of the corona crisis, supply bottlenecks have occurred: flight and seaborne transportation cancellations have led to huge supply bottlenecks, particularly for electronic products. During the crisis, this was exacerbated by unnecessary stockpiling. Companies bought and stored more components than they needed to ensure they were safe, because they were scared of experiencing a shortfall in supply,’ explains Dr Thomas R Dietrich, CEO of the IVAM International Microtechnology Business Network.

Raw materials and individual components were also scarce, because the industry recovered more quickly than many suppliers expected it to. However, this will return to normal within a short period of time.

Computer chips also became in short supply during the crisis because medical technology suppliers in particular suddenly needed far more of them. Dr Meinrad Lugan, CEO of BVMed, recently put the situation into perspective: In many sectors, the issue was not shortages in terms of quantity but, instead, distribution issues. Lugan notes that there was a ‘trend to make huge excess orders or multiple orders’. The resulting supply bottlenecks should be combated using ‘smart digital solutions based on existing e-standards’.

According to IVAM, internationalisation of the economy would still be expedient, as the global supply chains could not be maintained, which is the opposite of constructive. European manufacturers need the option to carry out production at a lower cost in other countries in order to remain competitive. These producing countries, in turn, need European customers in order to keep their own economies running. However, according to IVAM, there should still be local supply chains for critical components – particularly for sensitive products that are important for basic care of the entire population, for example in the healthcare sector.

The CompaMed Suppliers’ Forum has even more to offer in terms of content. Current developments throughout the entire process chain are presented in a hands-on way: mechanical and electronic components have their moment in the spotlight in the expert talks, along with innovative basic materials, manufacturing processes, all types of contract manufacturing, design and useability aspects and quality assurance. Keynote speeches on new markets complete this diverse programme. Further focal themes include the added manufacturing, electronic and regulatory affairs sectors.

Thus, Dr Benedikt Janny, who is the Managing Director of USE-Ing. and Head of the User Research and Usability Engineering Division there, reports on human-centred development of medical technology products, better known as useability engineering: This is not only a regulatory obligation for medical device approval, but also offers medical device manufacturers the opportunity to differentiate themselves in the market by taking relevant user wishes into account early on in the product development process and implementing them in innovations. The keynote speech (15 November) explores which regulatory requirements are applicable for useability engineering and the opportunities that exist to establish human-centred development processes and to create actual added value for the product user by increasing useability within the scope of user-centred innovations.

The useability engineering process is closely linked with quality management and the requirements of the engineering process. In addition, Dr Janny, as an expert, will indicate which types of use-based risks exist and are to be analysed within the course of product development. Additionally, the question is also explored regarding which prototypes companies can generate without great cost and effort in order to validate their medical products early on with real users.

Additive manufacturing and robotics remain exciting themes in medical technology. Toolcraft AG sees itself as a pioneer of future-oriented technology such as additive manufacturing and in the construction of individual robot cells. As a partner for complete solutions, the company offers the entire process chain, from the concept to manufacturing to qualified precision components using additive manufacturing, machining and injection moulding, electrical discharge machining and mould making. Within the scope of robotics, customised, fully programmed integrated solutions are implemented. Daniel Distler and Patrick Meyer (Head of the Robotics Division and Head of Technical Sales and Distribution at Toolcraft) put their knowledge gained over 30 years of experience in the industry to good use in their talk at the CompaMed Suppliers’ Forum and detail the advantages of additive manufacturing using a wide variety of application cases for medical technology.

For example, Toolcraft AG uses additive manufacturing to make custom implants for individual patients. Furthermore, this mid-sized company has developed an automated complete solution for manufacturing and packaging a cerumen filter for hearing aids (which protects against contamination with ear wax and moisture).

Holger Frank, CEO of Mechatronic, talks about ‘The potential of the IoT in medical technology – using the example of the AED. An AED is an automated external defibrillator, a portable medical device that can also be used by people without medical training. ‘In terms of the future development of important IT technology, 80% of all those surveyed assume that the Internet of Things will play an important role, according to a study by PwC’, Frank explains.

Mechatronic delivers important devices for IoT developments in the medical field, which enable communication between the device and the cloud. In essence, two solutions are possible: the device and communication are either integrated into one system or into separate units. An important factor for all versions is the question of which radiocommunication standard they need to be certified with. These vary throughout Europe and the USA and also differ based on the country in which one is based. Large countries such as China, Russia and Canada also have their own standards. Mechatronic emphatically pleads the case for AEDs that execute an automatic test every day and has developed the relevant hardware to enable the test state to be monitored via a cloud solution. Background: 30% of the devices that are available in public space do not work because the maintenance and servicing have not been performed correctly. 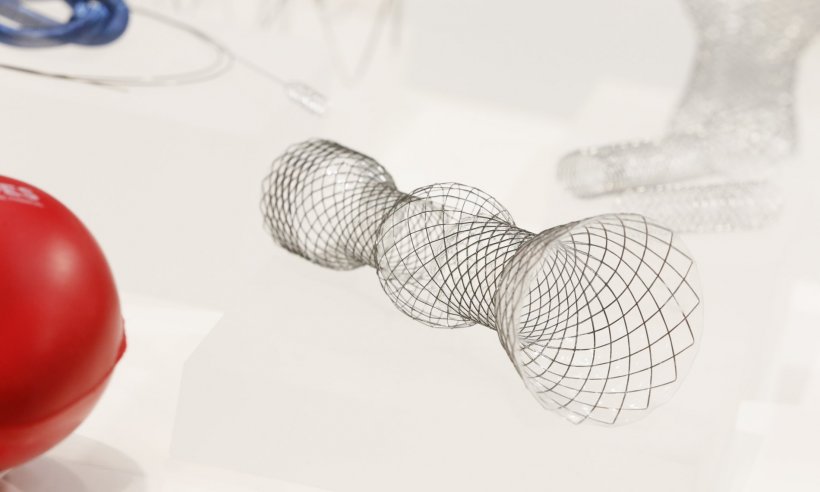 Highlights on the IVAM stand include new sensory developments. Conditions involving the cardiovascular system are among those which are most frequently cited as a cause of death in the industrialised nations. An important indicator for this is high blood pressure, which is currently still diagnosed and monitored by regularly taking blood pressure mechanically using an upper arm cuff.

This method is uncomfortable and limits the patient in their daily activities, and, in comparison to other methods, only delivers a few selective measured values. An optical sensor can provide help here. This sensor, which works using the basic principle of photoplethysmography (PPG), records the fill level of the blood vessels in the skin over time. Using the contour curve (pulse waves) recorded in this manner, a patented procedure is used to identify relevant points in time to determine the cycle of the pressure wave in the aorta, which enables conclusions to be drawn on changes in central blood pressure. In addition to offering an alternative to classic cuff measurement, the process also gives a blood pressure result for each individual heartbeat. With this analysis of short-term and mid-term fluctuations, doctors expect to achieve a novel diagnostic approach for early detection of a variety of conditions in multiple different patient groups (e.g. pre-eclempsia). The sensor developed at the CiS Forschungsinstitut für Mikrosensorik (CiS Research Institute for Microsensors) can be worn in the ear, which, in addition to numerous physiological advantages for signal quality and signal stability, means that it is comfortable to wear throughout the day. In addition to blood pressure, it can record many other vital signs, such as heart rate, heart rate variability as well as the blood oxygen levels. Within the scope of the CompaMed High-Tech Forum, Dr Martin Schädel, Head of the MOEMS Division at the CiS Forschungsinstitut für Mikrosensorik, gives a lecture on this development. 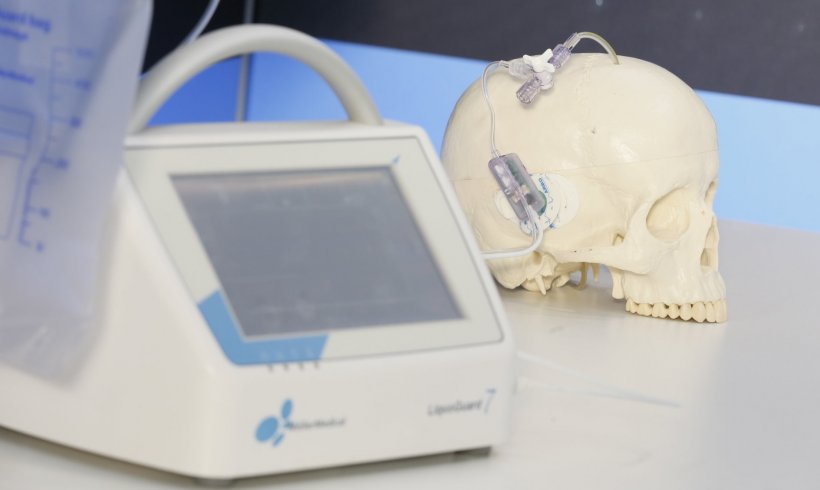 High-tech communication between the body and modern IT

With its next-generation electrode design, CorTec creates new pathways for communication between the body’s own electric signals and modern information technology. This young medical technology company specialises in developing efficient technology for active implants for recording over long periods of time and stimulation of neuronal activity. The technology comprises customised components such as electrodes for derivation and stimulation within the central and peripheral nervous systems. Its patented AirRay electrode technology has enabled CorTec to overcome the current limitations when working with electrodes with mechanical properties that can be adapted flexibly and highly precise manufacturing conditions. The manufacturing process, using ultrashort pulse lasers, makes the technology highly reproducible even at very small dimensions as little as 25 μm, and with a high density of electrical contacts. The flexibility of the technology enables a wide variety of product properties, such as thickness, the number of contacts, contact spacing and contact shape, and the total size of the electrode, to be modified.

The components can, for example, help localise the epileptogenic focus that needs to be removed using surgery in patients with certain types of epilepsy. CorTec’s aim is to be a leading partner in developing innovative therapies. In particular, the design flexibility of the AirRay electrode technology makes it an important building block for the approach of communicating with the human nervous system and connecting it with AI.

This special electrode technology is, like the ceramics-based hermetic encapsulated casing, part of the CorTec Brain Interchange, a technology platform for innovative neurotherapy in a variety of fields of application, such as epilepsy, Parkinson’s disease, or bioelectronic medicine.

Medical Japan Tokyo: back on a larger scale

The 2nd Medical Japan 2019 Tokyo – the international Medical and Elderly Care Expo in Tokyo – will be held from October 23-25, 2019 in Makuhari Messe, Japan by Reed Exhibitions Japan Ltd. The…

A myriad of French innovations at Medica 2021

This year as every year, the very best in global HealthTech will be converging on Dusseldorf for the Medica trade fair. With more than 127 companies attending the event from November 15-18, France…