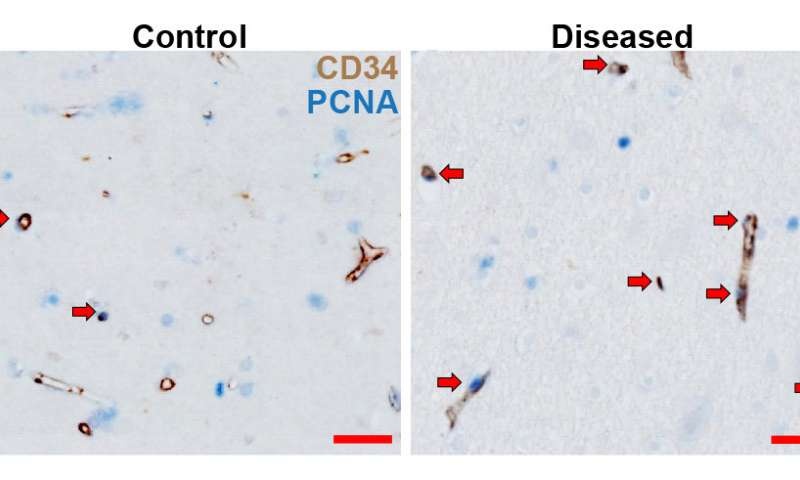 Treatment also prevents damage to brain cells caused by these blood vessel changes, raising hope that it could offer a therapy for dementia.
Small vessel disease, or SVD, is a major cause of dementia and can also worsen the symptoms of Alzheimer's disease. It is responsible for almost half of all dementia cases in the UK and is a major cause of stroke, accounting for around one in five cases. Patients with SVD are diagnosed from brain scans, which detect damage to white matter—a key component of the brain's wiring. Until now, it was not known how changes in small blood vessels in the brain associated with SVD can cause damage to brain cells.

A team led by the University of Edinburgh found that SVD occurs when cells that line the small blood vessels in the brain become dysfunctional. This causes them to secrete a molecule into the brain. The molecule stops production of the protective layer that surrounds brain cells—called myelin—which leads to brain damage. Treating rats with drugs that stop blood vessel cells from becoming dysfunctional reversed the symptoms of SVD and prevented brain damage, tests found.

Researchers say that further studies will need to test whether the treatment also works when the disease is firmly established. They will also need to check if the treatment can reverse the symptoms of dementia. Dementia is one of the biggest problems facing society, as people live longer and the population ages. Estimates indicate there are almost 47 million people living with dementia worldwide and the numbers affected are expected to double every 20 years, rising to more than 115 million by 2050.

Professor Anna Williams, Group Leader at the University of Edinburgh's MRC Centre for Regenerative Medicine, said: "This important research helps us understand why small vessel disease happens, providing a direct link between small blood vessels and changes in the brain that are linked to dementia. It also shows that these changes may be reversible, which paves the way for potential treatments."

This pioneering research highlights a molecular link between changes to small blood vessels in the brain.

Dr. Sara Imarisio, Head of Research at Alzheimer's Research UK said: "Changes to the blood supply in the brain play an important role in Alzheimer's disease as well as being a direct cause of vascular dementia. This pioneering research highlights a molecular link between changes to small blood vessels in the brain and damage to the insulating 'white matter' that helps nerve cells to send signals around the brain. "The findings highlight a promising direction for research into treatments that could limit the damaging effects of blood vessel changes and help keep nerve cells functioning for longer. There are currently no drugs that slow down or stop Alzheimer's disease and no treatments to help people living with vascular dementia. Alzheimer's Research UK is very pleased to have helped fund this innovative research, which is only possible thanks to the work of our dedicated supporters."

Dr. Nathan Richardson, the MRC's Head of Molecular and Cellular Medicine, commented: "This study is a great example of how innovative discovery science into regenerative mechanisms can be applied to improve our understanding of how vascular changes contribute to dementia. This research in rats opens up new possibilities for developing therapies for cerebral small vessel disease."